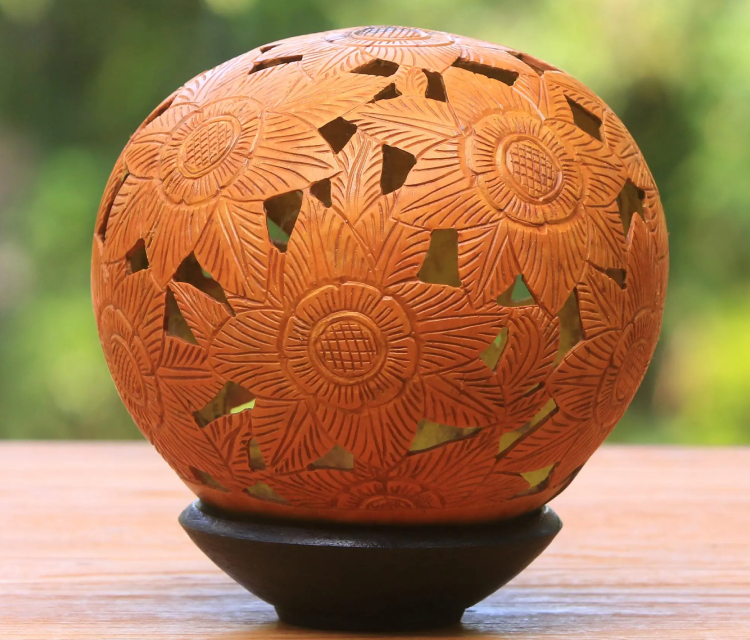 Coconut shells have been part of art and crafts ever since the discovery of time. Adding aesthetic values while being purposeful is what is achieved by crafts. And this has become ever the easier with coconut shells as objects of artistry. Availability of material is one added advantage, along with the low cost in procurement which allows the artisans to experiment further and beyond. Besides, these are not as fragile as china-ware and could be used for practical applications of our lives all the more. Since most of the crafts with coconut shell projects are quite easy to be done at home by yourselves, it could become a new hobby or even sharpen your hidden talents!

Finding the required objects for the craft and organizing them ready to start the craft is as important as any other task. The craft would be impossible without coconut shells, for obvious reasons, so let’s begin with a few extra as a backup too. For connecting the different pieces, we should use m-seal or silicone glue. To remove the fibres and make a smooth surface on the coconut shell, get sandpaper from an electronic store. Wood Varnish to preserve the shells and for touching up with the decoration, acrylic paints are the best bet. A bottle cap should be considered for the base of the craft.

To begin this crafts with coconut shell project, take two coconut shells and dry them overnight. With the moisture removed from them, it would last longer. WIth the sandpaper, rub-off the fibres from the shell and make it as smooth as possible without filing away any shell material. Apply a coat of wood varnish to protect the layer of shell from weather, dust and other external factors. Place the shells one on top of each other and fill the gaps out with m-seal clay for a continuous surface. Pro tip: If both shells are from the same coconut, there won’t be any gap between them. Let’s set up the bottle cap next for the base. It could be glued onto the bottom of the shell using m-seal clay. Add your decorative skills into the mix by working up the m-seal clay as and how you like to add textures, shapes and structures on the shell. 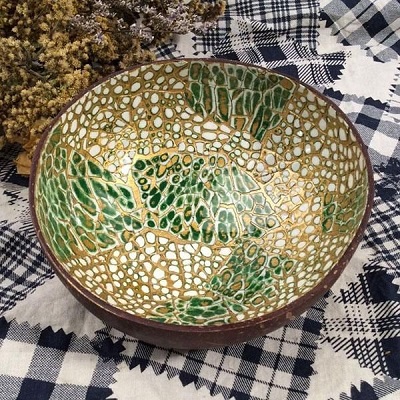 Let the shells sit out a day as it absorbs the varnish and the m-seal clay dries off to stick on stronger. Next phase requires you to get your thinking hats on and start your creativity engines. Begin with a concept in mind and work your way to build it into a finished idea. To have the best outcomes, try to go for contrasting colours. Suggestions would be that of a bird nest for decorative purposes. Or even attach a zip between the shells and use it as a jewelry box. There are a lot of ideas of crafts with coconut shell ranging from toys and show pieces, to utensils such as spoons, cups and pots.

Bright colours such as fluorescent yellow, fluorescent orange, fluorescent green, turquoise blue, and white could get used to conjure up an element of theme design on the shells. It could be your signature item or even a puzzle to the viewer. Some craftsmen use their art as a medium to convey a message and this one, crafts with coconut shells, shout eco friendliness in all languages! Bold use of design elements such as curves, lines, shapes on the shells could help in giving a definitive stature and idea through the object. People keep crafts with coconut shells in their homes as totems or effigies as a symbol of something important in their lives too. According to the requirement of the owner, customization could be offered to these crafts that suit as a memory or reminder.

Presentation of the crafts with coconut shells is quite as important as making one. As said “The Devil is in the detail”, do not hold yourselves from flaunting your art with a suspensive element hidden along with it. Add as much detailing to the craft as possible so that the viewer may be astounded by the amount of thought and care put into developing this artwork. Even with minimal usage of distinct colours, one could get the final output as eloquent as it can be. Wrapping it in a see-through packaging while using ribbon decorations would add up to its appeal. Any object in perception may be converted into crafts with coconut shells, by putting enough thought and background work.